The Tall Man (real name "Jebediah Morningside") is a playable character in Terrordrome: Rise of the Boogeymen. He, along with the rest of the characters, is a guest fictional character of the Phantasm horror film series, where he is the main antagonist.

Originally, the Tall Man was a mild-mannered 19th century mortician by the name of Jebediah Morningside. After years of performing funerals and burying the bodies of those who had died, he began to develop a fascination with any possible connection between human world and the world of the dead.

Jebediah's curiosity eventually led him to construct a machine that enabled him to travel through time and space. After going through the portal for the first time and returned, something mysterious happened to him. He gained some new abilities like superhuman strength and resurrecting dead bodies. His personality is also changed, as he is now obsessed to collect every human bodies and resurrecting them as his slaves.

His "Tall Man" nickname comes from Michael "Mike" Pearson, the main protagonist of the first film. Because Mike at that time didn't know Tall Man's true identity, he simply referred him as "the Tall Man" due to his tall posture.

Tall Man focuses on using his sphere for long distance attacks, which makes the opponent difficult to get close on him. His helper involves him summoning a dwarf that can grab the opponent in a few seconds.

Tall Man summons an army of spheres to attack the opponent.

Tall Man summons three spheres to circle around him, causing damage to the opponent within range.

After seizing control of a new town, the Tall Man found a mysterious box,

he immediately understood that a new realm was at his reach.

He commanded some of his creatures to summon the Cenobites.

From the shadows, he would learn from them and strike later.

The Cenobites where tough opponents and they were able to hurt him.

But the Tall Man were many and eternal, time was his best ally.

The Tall Man kept coming back and each time the Cenobites were getting weaker.

For the first time the Cenobites needed the help of their god Leviathan to help them out.

The fight stopped instantly. The Tall Man didn't expect this.

Leviathan, the god of this realm, was too powerful...

Nevermind, he had plenty of time to plan an invasion.

One day he would come back to this realm and defeat Leviathan.

The Tall Man left the hell realm and disappeared back into his own world.

He started planning new ways to fight against Leviathan.

During development, the ability for Tall Man to transform his severed body parts into insects was planned to be added into the game, but it was later scrapped making this model for the insect unused. 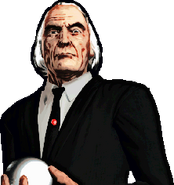 Tall Man at the select screen

Tall Man as he appears in the game

Terrordrome Rise of the Boogeymen Chapter 4 Tall Man
Add a photo to this gallery
Retrieved from "https://terrordrome.fandom.com/wiki/Tall_Man?oldid=9178"
Community content is available under CC-BY-SA unless otherwise noted.