Pumpkinhead is the name given to a revenge demon (or demons), starring in the Pumpkinhead series. Pumpkinhead seems to take a very supernaturally mutated form of a human, invoked to take painful revenge on those who the summoner commands, at the price of their soul.

Pumpkinhead is the largest player on the board, with the runner up being Tall Man. His greatest strengths are his large size, sharp claws, and his long tail. He also interestingly uses what appear to be pro wrestling moves, such as picking people up, slamming then on his knee, jumping on them, as well as picking them up and slashing them with his other arm. He won't set any speed records but he can counter this by backing his opponent into a corner and attacking them when they are within the range of his tail.

His special moves involve grabbing a tree branch (regardless of the stage) and bashing the enemy.

Once again the demon of revenge had been summoned.

With a new prey to hunt down.

But chasing another demon was rather unusual.

Nevermind, nothing would stop Pumpkinhead in his task.

After summoning Pumpkinhead to help him fight against Pinhead,

Ash realized he was in trouble... again.

Ash thought that if the Necronomicon could summon this thing,

it could certainly destroy it too.

The book opened a vortex and as invincible as he was,

Pumpkinhead wasn't strong enough to fight it and was swallowed into it.

So she raised a new demon to get revenge.

Now a new demon was chasing Ash, taller and stronger.

Pumpkinhead at the select screen 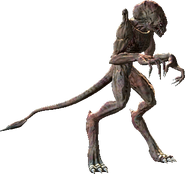 Pumpkinhead as he appears in the game

Terrordrome Rise of the Boogeymen Chapter 7 Pumpkinhead
Add a photo to this gallery
Retrieved from "https://terrordrome.fandom.com/wiki/Pumpkinhead?oldid=9111"
Community content is available under CC-BY-SA unless otherwise noted.