Start a Wiki
Pinhead is a fictional character from the Hellraiser series mostly serving as the main antagonist. Pinhead is the leader of the Cenobites formerly human creatures from an extradimensional realm who travel to Earth through the Lament Configuration and harvest human souls. Depicted as intelligent and articulate, the character was deliberately presented as a departure from the mute or wise-cracking 1980s horror movie villains who preceded him, being based more on Count Dracula. He appears as a playable character in Terrordrome Rise of the Boogeymen.

Pinhead was originally the English-born Elliot Spencer, who was a captain in the military and participant in World War I. During the war, Elliot would witness and experience many atrocities, which would cause him to lose faith in humanity and God.[1] Traveling to India after the war in 1921,[1] Elliot purchased the Lament Configuration, a puzzle box and gateway to Hell created in the 18th century by a Frenchman named Phillip Lemarchand. Solving the box, Elliot had his flesh pierced by hooked chains that shot out of it and was dragged to Hell. In a chamber in the Labyrinth Hell, Elliot had a grid-like pattern carved into his head with nails subsequently being driven into intersections of the grid. At first pained by these mutilations, Elliot grows to relish in them. Losing the memories of his past life, Elliot was transformed into a Cenobite, one of a group of beings which serve the Hell god, Leviathan.[2]

Several decades after his transformation, Pinhead and his Cenobite colleagues - Chatterer, Cut-Throat and Butterball - are summoned by the hedonistic Frank Cotton, a man who had bought the Lament Configuration believing he had experienced all the world had to offer. Shortly after being summoned, Pinhead tears Frank apart with his hooked chains. With Frank now in Hell, Pinhead uses the Lament Configuration to close the gateway made to Earth. Pinhead is brought back to Earth sometime after taking Frank by the man's niece Kirsty Cotton, who had stumbled upon the puzzle box and solved it. Stating his purpose and intent to take her to Hell, Pinhead is intrigued when Kirsty mentions Frank had escaped him and decides to give the young woman a chance to prove her claims, accepting her deal to take Frank to Hell in her place.

Following Kirsty to her parent's house, Pinhead and his fellow Cenobites tear Frank, who had taken the skin of his brother, Larry, apart when he reveals his identity to them. With Frank back in Hell, Pinhead goes back on his deal and sets his sights on Kirsty, but is forcibly sent back to Hell with his minions when Kirsty uses the Lament Configuration against them.

Pinhead sacrifices himself to allow Kirsty and Tiffany to escape the Channard Cenobite. Hours after his encounter with Kirsty, Pinhead and his Cenobite troops are brought to Earth when a young girl named Tiffany is manipulated by her doctor Phillip Channard into solving the Lament Configuration. As his minions eagerly prepare to take Tiffany, Pinhead senses the girl did not knowingly solve the puzzle and stops his comrades before returning to Hell with them. While in Hell, Pinhead appear before Tiffany and Kirsty, who had followed them into Hell several times, taunting the two and changing the Lament Configuration into a diamond form, a miniature replica of Leviathan.

Pinhead's death results in him being separated into two halves, one good and the other evil and unbound by the laws of Hell. While his good half, embodied by Elliot Spencer, is placed in a realm of dreams, Pinhead's evil half is trapped within the Pillar of Souls, which rises from a bloody mattress in the Channard Institute, where Pinhead attacks and kills a bewildered moving man.

Pinhead is an extremely powerful being, and as such, has several supernatural abilities. His preferred method of attack is by summoning hooks and chains to mutilate his opponent, often. These chains are subject to his total mental control and he may direct them at will. His magic is also used for creating objects out of thin air, teleporting, creating explosions at distances and deceiving opponents with illusions. He is capable of creating other cenobites from both living and dead victims.

The Lead Cenobite Pinhead was brought back to Earth once again.

But this time something was wrong.

Impossible to know who summoned him. Maybe the summoner...

...Didn't come from this world? He would have figured out anyway.

After fighting against a double of himself, he came back to Hell.

It was unexpected. He wondered who had tried to trap him.

It made no sense, Cenobites had power over everyone.

He was defeated by so many opponents, yet still no answers.

A piece of the puzzle was missing.

Perhaps Leviathan could help him solve this question.

His god revealed to him the truth, some magic was behind that.

The Warlock, Satan's son, helped all of them in the shadows.

Leviathan sent Pinhead back. "Time to take care of this Warlock." 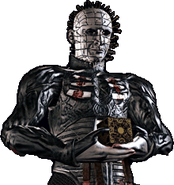 Pinhead at the select screen

Pinhead as he appears in the game

Terrordrome Pinhead Combos
Terrordrome Rise of the Boogeymen Chapter 14 Pinhead
Add a photo to this gallery
Retrieved from "https://terrordrome.fandom.com/wiki/Pinhead?oldid=9202"
Community content is available under CC-BY-SA unless otherwise noted.