Michael Myers is the main character and villain of the Halloween franchise except for Halloween 3 Season of The Witch and appears as a playable character in Terrordrome: Rise of the Boogeymen.

As a child, Michael was admitted into a psychiatric hospital for killing his older sister Judith Myers. After 15 years of captivity, Myers broke out of the asylum and for 23 years, he hunted down and murdered his younger sister, Laurie Strode, and the rest of his family. His weapons in the films are various, but he mostly uses the famed Butcher Knife.

Michael rushes forward, unleashing a super combo of his special attacks, finishing with Slicing Up.

Michael unleashes a super charged version of his Air Grab, slamming an in-air opponent down to the ground. He follows up by stabbing the opponent in the pelvis several times for heavy damage.

As always, voices spoke to Michael, evil ones...

But today one of them spoke louder, making the others silent.

"Time to go Mikey, we have a little job to do"

Michael was smiling, evil had never been so strong in him.

The Tall Man didn't understand why he couldn't overcome this foe!

Each time he was beaten, Tall Man came back instantly, but no issue...

For the first time the Tall Man had to give up the land he was after.

He had other plans anyway, this place could wait.

Mission completed. A light... then a voice talked to him again.

But this time it was different...

This time it made itself visible to him.

Derry was safe now, Tall Man's threat was no more.

"I have something more I need you to do Mikey, you will love it..."" 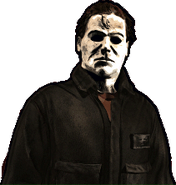 Michael Myers at the select screen

Michael Myers as he appears in the game

Terrordrome Rise of the Boogeymen Chapter 3 Michael Myers
Add a photo to this gallery
Retrieved from "https://terrordrome.fandom.com/wiki/Michael_Myers?oldid=9201"
Community content is available under CC-BY-SA unless otherwise noted.