Matt Cordell is the main antagonist of the Maniac Cop films and appears as a playable character in Terrordrome Rise of the Boogeymen.

Officer Matthew "Matt" Cordell was the main antagonist of "Maniac Cop" series and despite being a uniformed police officer was in reality a mass murdering serial-killer not unlike Jason Voorhees or other horror icons, killing anyone that crossed him path.... He began as a serial-killing psychopath but would later be revived as an undead monster for the sequel and would be shown of being able rise a third time in the style of a revenant in order to exact bloody revenge on the living.

While slaughtering down a CIA facility,

Cordell wanted to meet the guy, he started the search for him.

And finding people was his job.

he needed to persuade him to give him what he always dreamed of.

Cordell wanted a new healthy body, a perfect one.

Surprisingly, West appeared to be rather enthusiastic.

The fact is Cordell was very efficient at finding... material.

And such assistant was so valuable to West!

The best part: he has an undead and immortal guinea pig!

So great to experiment nanoplasma transfer.

Such a strange alliance, but how long could that last?

Cordell began to wonder if the scientist wasn't using him. 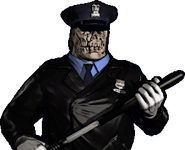 Matt Cordell at the select screen

Matt Cordell as he appears in the game

Terrordrome Rise of the Boogeymen Chapter 5 Matt Cordell
Add a photo to this gallery
Retrieved from "https://terrordrome.fandom.com/wiki/Matt_Cordell?oldid=9257"
Community content is available under CC-BY-SA unless otherwise noted.