Herbert West was the main character of the Re-Animator series of films, comics and appears as a playable character in Terrordrome Rise of the Boogeymen.

Herbert West is the inventor of a special solution that when injected into a main artery of a recently deceased person causes the body's mechanical, living functions to return. However, most subjects that have undergone the "re-animation" process have turned violent and, after failed attempts to return to their own graves, have terrorized the communities into which they were reanimated.

Herbert West is a powerful fighter. He fights with a wide assortment of weapons that he pulls from his trusty doctor bag. His weapons include a syringe, gravedigger shovel, portable defibrillator, hand gun, and even a reanimated arm. His specials are a reanimated head with bat wings that attacks his enemies and a surgeon that will jump down and either stab the enemy or have a giant tentacle erupt from his gut to impale the enemy.

West had stolen too many souls from Cenobites by reanimating corpses.

They wouldn't allow that. But West was able to make a deal with them.

He promised he would give them thousands of souls if they spared his life.

Thanks to his knowledge and research, he knew how to do that.

With no more Cenobites on his tail, West was free to continue his research.

He betrayed Ash since he only wanted the Necronomicon from him.

The Cenobites were after West, not Ash, and he used that fool so well.

He left the book with Ash, as only a few pages interested him.

Killing Ash wasn't needed, besides he could use him again someday.

Fortunately he had powerful allies to protect him from Ash's possible revenge.

But he thought it was only a matter of time until things could change.

The Cenobites could come back again and get him, he must hurry.

Soon he would be able to defeat death and in the process make him a god. 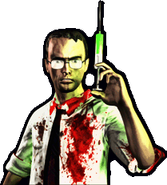 Herbert West at the select screen

Herbert West as he appears in the game

Terrordrome Rise of the Boogeymen Chapter 8 Herbert West
Add a photo to this gallery
Retrieved from "https://terrordrome.fandom.com/wiki/Herbert_West?oldid=9177"
Community content is available under CC-BY-SA unless otherwise noted.