Frederick "Freddy" Charles Krueger is the main antagonist of the A Nightmare on Elm Street franchise and appears as a playable character in Terrordrome Rise of the Boogeymen.

Fred "Freddy" Krueger is a fictional character created by Wes Craven, and is the main antagonist and a killer from the slasher film series A Nightmare on Elm Street. When he was burned to death in 1971 by the citizens of Springwood, he was offered the spot as "Dream Killer" from the demons who live in the depths of hell. He uses this new career of his to his advantage to murder the children of his killers in their dreams.

Freddy throws both of his hands up, unleashing a wave of fire from the ground that causes knockback. Freddy quips, "Welcome to my Nightmare!"

Freddy shapeshifts into a grotesque serpent that lunges forward, up, then down, severely damaging the opponent. Freddy is invunerable in Worm state. This is the better of his two Unleashed moves and is inspired by his actions against Kristen Parker in A Nightmare on Elm Street 3 The Dream Warriors.

Freddy wasn't easily scared, but this time he was in trouble.

Cenobites in the Dream World? Probably looking for him.

He cheated death once and escaped their hell with the help of dream demons.

But he knew they would find him eventually. He needed a plan and a good one.

Freddy tried his best but the Cenobites were far more powerful.

"Come back with us now Freddy, enough games!"

Freddy was about to lose. Pinhead had him already chained.

But Freddy always had a trick up his sleeve.

He gave his ally Candyman the oppurtunity to strike back.

As the fight had already weakened Pinhead, his end was near.

Freddy then took advantage of the situation and betrayed Candyman.

He trapped both of them in a dream mirror, and broke it.

Freddy knew they would eventually escape one day, but it would take time.

Until then, time to enjoy the victory and have fun! 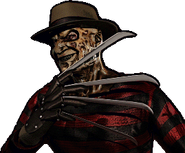 Freddy Krueger at the select screen

Freddy Krueger as he appears in the game

Terrordrome Freddy Krueger Combos
Terrordrome Rise of the Boogeymen Chapter 12 Freddy Krueger
Add a photo to this gallery
Retrieved from "https://terrordrome.fandom.com/wiki/Freddy_Krueger?oldid=9200"
Community content is available under CC-BY-SA unless otherwise noted.