Charles Lee "Chucky" Ray was the main antagonist of the Child's Play series. He appears as a playable character in Terrordrome Rise of The Boogeymen.

Chucky was originally a serial killer named Charles Lee Ray. He was chased down by the police after kidnapping a woman. During the chase, he fled into a toy store and used a voodoo spell on a Good Guy Doll. His spirit possessing the doll, Chucky's goal was to posses a human body. In his later life, he gave up on this and decided to live up to the infamy of being a killer doll, all while cutting the ties of anyone who betrayed him.

He uses a knife and nailgun and can use a voodoo doll. He is very small and fast and can do somersaults from walls of the level.

No sign of himself in any newspapers, it was getting on Chucky's nerves.

Myers, Cordell, Voorhees, but nothing about the killer doll!

"I will show them all who's the greatest!"

Chucky won the fight against Jason.

It wasn't easy but now Jason was at his mercy.

It gave Chucky a brilliant idea.

He couldn't kill him, but there was much better to do.

What terrible things he'd be able to do with such a powerful body.

The ritual worked beyond his wildest dream,

Chucky felt an awesome power running through his veins.

A brilliant mind in an indestructible body, the ultimate killer was born.

"You're a fuckin' drag! (Grab and Headbutt)

"Fuck you very much. (Grab and Stab)

"I am Chucky: The killer doll! (Deadly Spin)

"You little shit!" (When grabbed by Ghostface's Helper)

"You have got to be kidding." (When grabbed by Helpers)

"Why does that look so familiar?" (Unknown) 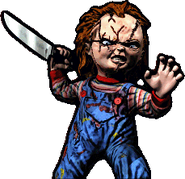 Chucky at the select screen

Chucky as he appears in the game

Terrordrome Chucky Combos
Terrordrome Rise of the Boogeymen Chapter 11 Chucky
Add a photo to this gallery
Retrieved from "https://terrordrome.fandom.com/wiki/Chucky?oldid=9193"
Community content is available under CC-BY-SA unless otherwise noted.