Start a Wiki
Candyman was the titular antagonist of the horror movie of the same name, although a brutal killer and demonic spirit he has an especially tragic past compared to most horror icons which arguably made him more sympathetic - though he was nevertheless just as dangerous and deadly as any other slasher movie antagonist.

Daniel Robitaille is the true name of the vengeful ghost of an African American man who was brutally lynched for a forbidden interracial love affair in the 19th century, and will haunt and kill anyone who calls the name of Candyman before a mirror five times in a row, he also is largely driven by a need to sustain his legacy, killing those who doubt his spectral existence in order to ensure that the rumor of him is kept alive.

Candyman found a solution to his nightmares within the Dream World.

A demon who can set him free from his haunting past.

Freddy offered him to put an end to his curse.

But Candyman must do a little something for him first.

The promise of freedom made Candyman even stronger.

Immortal between two worlds, the Cenobites had no power over him.

But Freddy betrayed Candyman, he used him to defeat Pinhead.

He broke a dream mirror and used his power to trap them both forever.

That was a mistake, Candyman wasn't stupid, he never trusted Freddy.

He anchored his soul in Freddy's reality when they made their pact.

Candyman came back surprising Freddy and easily defeated him.

But Freddy managed to escape to some dark corner of the Dream World.

He released Pinhead from the mirror and decided not to fight them,

it wasn't his battle and they couldn't help him anyway.

"What's blood for... if not for shedding?" (Introduction)

"You doubted me." (Teleport)

"Surrender to me." (Super Throw)

"You must come to me." (Teleport Dive)

"Be my victim." (Teleport Slaughter)

"In death, you will become legend." (Win quote)

"Still, you doubt me." (Performing Slasher)

"I have shown you death." (Finishing Slasher)

"No." (Dizzy or when grabbed by Helpers) 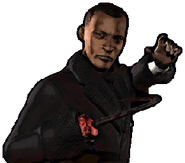 Candyman at the select screen

Candyman as he appears in the game

Terrordrome Candyman Combos
Terrordrome Rise of the Boogeymen Chapter 13 Candyman
Add a photo to this gallery
Retrieved from "https://terrordrome.fandom.com/wiki/Candyman?oldid=9256"
Community content is available under CC-BY-SA unless otherwise noted.